Facebook0Tweet0LinkedIn0
You are here: Home / The Customs Inspection Experience / Documentation you need to cross the border / Types of Documentation
Details on Current U.S. and Canadian Covid-19 travel restrictions

The US will require a “Real-ID compliant document” when a US citizen boards any domestic flight after October 1, 2021. You will not be allowed to board your flight if you do not have a Real ID compliant document. It is not required to cross the US and Canadian border. A Real ID is not a separate type of identification. It is any documentation that the US federal government considers to be highly secure and accurate. Typically, this will be your passport or a state issued enhanced driver’s license. You still need your passport if you are flying internationally. Below are the types of documents the US considers Real-ID compliant. This list may change over time:

A passport is a small booklet issued by all countries for international travel. It is the most universally accepted type of documentation proving your identity and country of residence.  It is frequently the only piece of documentation you require for short term travel to another country. Both American and Canadian passports are typically blue in color and are valid for 10 years.  Most passports now contain RFID chips which electronically transmit the same information as on the passport’s picture page, including a digital version of your passport photograph. American passports have RFID-proofing built into their covers so they can only be scanned when opened within the passport.

In the U.S., you can apply for a passport in person at your local post office or another type of passport acceptance facility.  If you already own a passport you can renew by mail, although there are a few exceptions so make sure you read the instructions carefully.

It generally takes 3 – 6 weeks for a U.S. passport application to be approved.  There is less demand in winter months so processing is much quicker then.  It can be longer than 6 weeks in the spring as travel season approaches. Make sure you apply early enough to receive it before you want to leave. We have a separate page if you need an expedited passport or visa for travel. 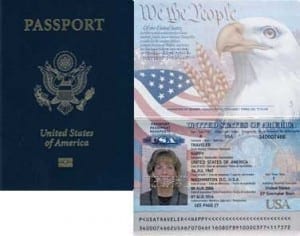 Normal turn-around time for a Canadian passport is typically 4 weeks. For and additional fee you can use an expedited process which will complete in around 2 weeks. We have a separate page with information on renewing or getting a passport plus how to get an expedited Canadian Passport.

In 2012 Canada began issuing electronic passports called ePassports.  They look like the older passports but have an electronic chip inserted into it. The chip holds your family name, sex, birth date, as well as birth location and a digital image of the passport holder’s face.  The new passports are issued for 10 year terms although there is a cheaper version available for only 5 years.  The older non-chip passports will remain valid until their expiry date.

Canadian Passports for children under 16 are good for five years.

The passport card looks similar to a driver’s license.  Like passports, they are issued by the U.S. Department of State and are valid for 10 years. This card lets you travel between by land or sea between the US, Canada, Mexico, or the Caribbean, but it is not valid for travel by air or to any other international location. The card is less expensive and more portable than a full passport.

If you already have a valid passport you may apply by mail. Otherwise, you must apply in person at your local post office. Make sure you apply at least six weeks before travel – especially just before heavy travel periods such as summer.

See the United States Department of State website or call the National Passport Information Center at 877-487-2778 for more information.

These three types of enhanced identification cards look just like a regular license but contain a magnetic strip and a microchip that will give the border protection officer access to your file on their computer systems automatically.  It is a form of “trusted traveler” documentation that will speed up your border crossing because you are “pre-qualified”.

These ID’s will speed up your travel by land or water into Canada, the United States, Mexico or the Caribbean.  Like a passport card, they are NOT valid for travel by air, or to anywhere else in the world.  Be aware of this if you are travelling across the border by car but then returning by air – or if you are going through another country along the way!

Like NEXUS, SENTRI and FAST cards, the Enhanced ID cards contain a radio frequency Identification (RFID) chip that transmits a number as much as 30 feet away. The RFID chip is read as the vehicle queues for inspection at the border and pulls up your biographic information, a photo, and the results of terrorist/criminal checks.  The border protection officer can look at the results quickly instead of entering information which enables faster processing.

To obtain an enhanced identification card you will undergo a background check by the issuing authority. Typically, you will need to pay a fee and submit items such as your Social Security card, proof of date of birth, proof of U.S. or Canadian citizenship and proof residence in the issuing jurisdiction. Not all states or Canadian provinces will issue an enhanced ID.

You can obtain an EDL / EIC for:

Information on how to obtain an EDL or EIC from any of these jurisdictions can be found at the U.S. Customs and Border Protection Website or the Canadian Border Services Agency.

NEXUS is another “trusted traveler” program that is designed to speed your drive across either the U.S. or Canadian border. It can also be used for flying into certain airports and for marine travel. This card is typically used by commuters who cross the border on a frequent basis. NEXUS members avoid wait times at border crossings by using dedicated lanes which are open at various hours of the day.  We have seen reports claiming NEXUS members saved an average of 30 minutes at land crossings.

NEXUS applicants pay a fee and voluntarily undergo a background check, in-person interview and fingerprinting. A criminal check done by NEXUS will turn up any criminal activity regardless of whether you were found guilty. If you have been fingerprinted for a criminal charge your NEXUS application will most likely be rejected although there is an appeal process.

To get a Nexus pass you can submit an online application at the Trusted Traveler website.  You may also go to the nearest enrollment center and fill out an application form.  For more information on the application process call 1-866-NEXUS26   (1-866-639-8726) from both the U.S. and Canada.

Like NEXUS, Global Entry is a U.S. Customs and Border Protection (CBP) program that allows expedited clearance for pre-approved travelers when you arrive in the United States. This program differs from NEXUS in two ways: it applies to travelers from countries other than Canada, and it allows expedited entry into the U.S. only – it cannot be used for entry into Canada or any other country.  NEXUS is therefore a better bet for U.S. / Canadian commuters or others making frequent trips between the two countries.  Global Entry is good at many airports, and land and sea borders.

As with all trusted traveler programs, you must be pre-approved for the Global Entry program. All applicants undergo a rigorous background check and interview before enrollment. You can get more information, and apply for Global Entry at the Global Entry website.

The FAST card is another “trusted traveler” card similar to NEXUS.  FAST is designed for carriers of commercial goods and provides dedicated border crossing lanes and expedited clearance to truckers at the U.S. border with Canada and Mexico.

FAST members reported saving an average of 27 minutes when entering the United States and 18 minutes when entering Canada. The card may be used in either a FAST lane or other land border crossings. However, the card cannot be used to enter the US in a Sentri or NEXUS lane. To use a FAST lane all persons in a vehicle must possess a valid FAST Commercial Driver card and the vehicle must be transporting eligible goods.

Government officials are envisioning that within 10 to 15 years the border will be completely electronic for carriers and that all carriers, drivers, and manufacturers will need to be a trusted partner” of CBP.  If this comes about all data about all parties will be available online, so there will be no need for drivers to stop and identify themselves or explain their loads.

To obtain a FAST card, drivers, carriers, and importers must undergo a risk assessment. For more information on FAST go to the Canadian Border Services Agency or the U.S. CPB website.

A Canpass card is issued by the Canadian Border Services Agency to facilitate border clearance for individuals wishing to cross the border into Canada in the following remote areas:

It is not a substitute for a passport or other necessary documentation.

SENTRI is a land-border crossing program that expedites CBP processing for pre-approved, low-risk travelers along the U.S.-Mexico border.   SENTRI members can use the NEXUS lane when entering the United States from Canada, but cannot use the SENTRI card to enter Canada via the NEXUS lane.